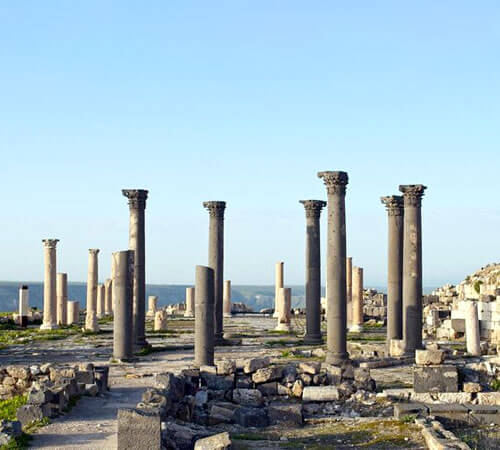 Historically known as Gadara, Umm Qais is located in the far northwest corner of Jordan overlooking the Sea of Galilee (Lake Tiberias) and the Golan Heights.

Gadara is mentioned in the Bible as the location where Jesus performed the miracle of the Gadarene swine took place (Mathew 8:28-34). Whilst the exact location of the miracle is unknown, it seems unlikely that it occurred in Gadara itself as it is too far from the Sea of Galilee (Lake Tiberas).

Greek, Roman, Byzantine and Ottoman architecture and artifacts can be found in Gadara. After the Romans took over the city in 63BC Gadara became one of the Decapolis cities, a union of ten cities in Palestine, Jordan and southern Syria which were centres of Greco-Roman culture. Gadara became renowned for its rich cultural life and was the birthplace of several scholars. Following the Battle of Yarmouk in 636, it came under Muslim rule. The city continued to flourish until 747 when it was abandoned following a huge earthquake.

The ruins are quite impressive, many built from local black basalt. See the 5-aisled basilica and theatre capable of holding 3,000 people, a colonnaded street with shops on a side-street, an octagonal church, Nymphaeum and more.