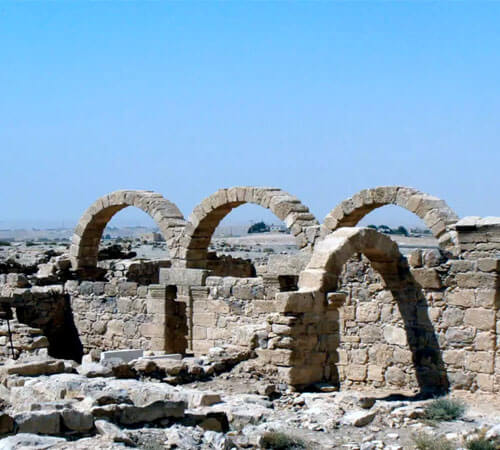 Listed as a UNESCO World Heritage Site (one of 4 in Jordan), Umm Ar-Rasis lies between Madaba and Karak. Known as KastromMefa’a in ancient times, it is mentioned in the Old and New Testaments.

Whilst the walled city is mostly in ruins, some of the best Byzantine church mosaics in the Middle Sast can be found here. The main attraction is the Church of St Stephen which contains a large and well preserved mosaic “carpet” which was created in the 8th Century. Within in the mosaic fifteen major cities of the Holy Land are depicted, both east and west of the river Jordan. The masterpiece was signed by six craftsmen – Abdela, Constantinus, Elias, Euremios, Germanus and Staurachios.

Only a small portion of the site has been excavated however there are 3 other churches, a Roman military camp and stone arches worth viewing. Located two kilometers north stands a 15m high Byzantine tower, built by early Christian monks. It is believed to have been a stylite’s pillar, built in the 6th Century. A small church, building and cisterns are located nearby.