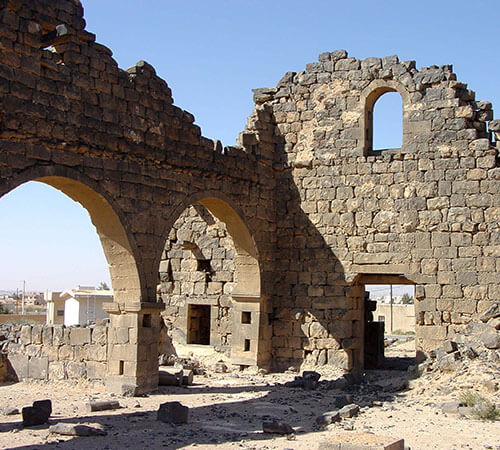 Approximately 90 kilometres north-east of Amman, close to the border of Syria, lie the ruins of Umm al-Jimal, referred to as the Black Oasis due to the fact that many of its houses, churches, barracks and forts were built from the local black basalt rock.

Visitors to Umm al-Jimal are not as frequent as other sites in Jordan due to its location and the fact that it does not have mosaics or inscriptions to view, however it is still worth visiting, perhaps in combination with a tour of Jerash. The city of Umm al-Jimal consists of over 150 buildings in an area nearly one kilometre x half kilometre in size. A large number of buildings two or three storeys high are still standing which gives the impression that it was only abandoned in recent times rather than over 1,200 years ago.

It is believed that Umm al-Jimal (“Mother of Camels”) was built originally by the Nabataeans in the 1st Century as an outpost on the trade route between Damascus and the south and had a population between 2,000 and 3,000 inhabitants. There are no springs or wells in the area so the entire water supply had to be gathered in hundreds of cisterns during the rainy season. The volcanic soil however is extremely fertile and even today, is well suited for agriculture.

In 106 AD, the Nabataean king ceded his kingdom to the Roman Emperor Trajan. Umm al-Jimal was enlarged and became an important military base. An encircling wall was built and a fort. In addition a new reservoir was constructed and a hydraulic system to supply it and other cisterns and reservoirs. The large, open area in the centre of town was used by caravans stopping to rest and trade.

During the Byzantine era more houses and 14 churches were constructed, many still showing the Byzantine cross as decoration. The population continued to grow, reaching an estimated 6,000 inhabitants. In the seventh century, however, power of the region was ceded to the Islamic Umayyad Empire and was abandoned after a major earthquake in 747 which destroyed most of the town.