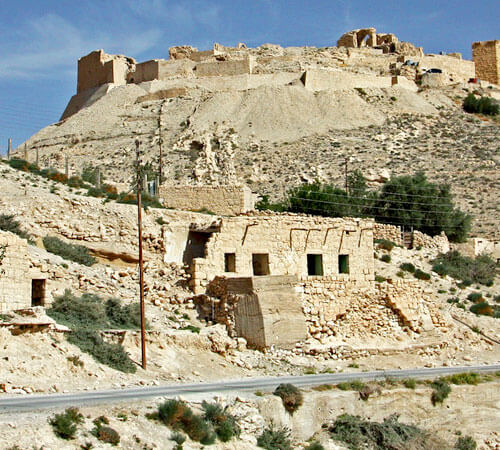 On a small hill near the village of Shobak stands the ruins of a Crusader Castle. Originally called “Mont Real”, it was built in 1115 by Baldwin I of Jerusalem. It was one of many castles erected at this time to protect the new province of Oultrejourdain from Muslim enemies who were attacking the Kings’ Highway, the main caravan and pilgrimage route between Syria and Egypt.

It was held by Philip de Milly then passed to Reynald de Chatillon when he married Stephanie de Milly. Reynald used the castle to attack the rich caravans that had previously been allowed to pass unharmed. He also built ships which were then transported overland to the Red Sea as part of a plan to attack Mecca. As a result of these actions Sultan Salah ad-Din invaded the kingdom in 1187. After capturing Jerusalem he went on to besiege Mont Real. Shobak finally capitulated to his troops in 1189.

Unfortunately little remains of the original Crusader fortifications except a church and chapel, although there are partial remains of a set of 3 impressive walls. The towers and walls are decorated with carved inscriptions dating from 14th Century Mamluk renovations. Other ruins to be seen consist of baths, cisterns and rainwater pipes. Near the gatehouse, there is a steep set of steps leading down to a well.