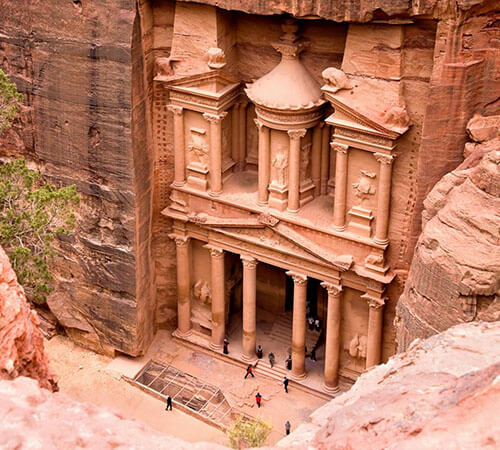 How can you describe the beauty of this lost city or its aura? Many have attempted to capture Petra’s charm in words; all of them have failed. The only way to appreciate this fantastic place is to see it yourself. When you enter through the Siq, you’ll be more excited about what lies ahead. Magnificent buildings carved from rock by skilled craftsmen are only one aspect of Petra; as you wander through the city, marvel at the size and height of the pillars at the Great Temple, the intricate mosaics on the floor of the Byzantine Church, and the beautiful colours in the rocks.

Rock is an apt name for this city since it was initially an Edomite settlement and the Biblical name Sela has the same meaning. The majority of the buildings you see now are from the Nabataean and Roman periods.

Nabataean Arabs were nomadic Bedouins who migrated north of Arabia over 2,000 years ago. They traded frankincense and myrrh—two scarce and valuable commodities—from their source in southwest Arabia through Gaza. The Nabataeans gained power by controlling trade routes that linked southern Arabia with Egypt, Syria and Rome.

Petra first appeared in 312 BC when Antigonus conquered it. It was probably no more than a storage place or a relatively safe location to stop en route. It wasn’t until the 1st Century BC that the Nabataeans began to settle at Petra and build and carve the magnificent city. These master craftsmen created superb temples and tombs in honour of their dead. The soft sandstone was the perfect medium to cut staircases to the high grounds where they worshipped their gods—sections of many staircases can be seen today.

The Nabataeans were great people who expanded their empire as far north as Damascus. Their first king was Aretas I, who ruled in 169BC, and their last king Rabbel II ceded the kingdom to Trajan in 106 AD, at which time it became the Roman province of Arabia Petraea.

Petra’s strategic location on the major trade routes, and its natural barrier of mountains, made it a natural choice for the capital of their empire. Moreover, the Siq, a narrow chasm winding for over 1 kilometre through the hills—was easy to protect and defend against invaders.

The Nabateans’ success was partly due to their ability to create sophisticated water supply systems. As Petra grew, the demand for freshwater increased exponentially—but the two natural springs within the city could not provide enough for everyday use by the inhabitants, supplying the public baths and the construction of the buildings. So a channel was cut from the springs at the top of Wadi Musa, bringing a steady water supply to Petra. In addition, large cisterns, lined with plaster, were cut into rocks surrounding Petra to store excess water. Even today, many of these channels can still be seen, especially as you walk through what is called The Siq. The springs seem to have been holy places; many have traces of buildings close by, which could have been shrines dedicated to the goddess Allat.

The Nabataeans, who developed their style of architecture, adopted many Greek and Assyrian designs as a result of contact with the outside world. The Nabataeans also adapted their architecture once Petra was absorbed into the Roman Empire; however, they still maintained their individuality by integrating Roman styles with their native Arabian ones. The city continued to prosper until the 3rd Century AD, when the easier Red Sea trade route became more popular than the overland route through Arabia. Christianity came to Petra sometime during the 4th or 5th Century but didn’t make an impact until the 6th Century when many of the tomb residents converted their ancient pagan tombs into churches. One part of Petra was called Haret el Nasara, or Christian quarter, because of the crosses carved on tombs there. But after the number of caravans passing through Petra declined, so did Petra’s prosperity, and many inhabitants moved. An earthquake destroyed many buildings in 363, and another massive earthquake in 747 AD caused Petra to be abandoned.

When the city of Petra was rediscovered in 1812, it was a legend of mystery. Even though explorers sought to locate this lost city, the few inhabitants in the surrounding districts protected its location until then. When you enter Petra Archaeological Park, you will be mesmerized by this city and the people who built and inhabited it. But the main street is only part of Petra. All the valleys leading away from the city were occupied, and there are a myriad of houses, etc., built into the rock faces to explore.

Ensure you don’t miss the High Place of Sacrifice with its fantastic views over the city and Ad-Deir (the Monastery) from where you can see Wadi Araba. Although both require climbing many steps, take your time and enjoy the fabulous vistas along the way.

If you visit Petra, don’t miss the High Place of Sacrifice with its fantastic views. Also, don’t forget to climb Ad-Deir (the Monastery) from where you can see Wadi Araba. Although both require climbing many steps, take your time and enjoy the fabulous vistas along the way.

Petra is an amazing archaeological site, once listed as one of the New Seven Wonders of the World. It was created by the Nabataeans and enhanced by the Romans. Today, it is a UNESCO World Heritage Site. There is so much to see that one day is not enough. Do yourself a favour and allow at least two full days to discover this fantastic destination. Our itineraries can be adjusted to include extra days in Petra.

We’ve invested heavily in infrastructure and have created new positions within the company to ensure that Petra Tours will be able to meet all of your travel needs. As a division of GO JORDAN TRAVEL and TOURISM, Petra Tours will continue to provide high-quality service throughout your stay in Jordan, from the moment you first step foot on Jordanian soil until you depart for home.

Every Monday, Wednesday, and Thursday throughout the year, Petra by Night offers visitors a chance to see Al Khazneh (The Treasury) lit by candles. Participants follow a candlelit pathway through the Siq, where they are offered tea at the end of their journey. Tickets can be purchased at your hotel reception desk or directly at the entrance gate.

A popular pastime in Wadi Musa (Petra) is to attend a cooking class at Petra Kitchen. Under the guidance of local Jordanian women and professional chefs, you will learn how to cook great Arabian food, which you have enjoyed throughout your time in Jordan. After the meal is cooked, you will sit down with your fellow chefs to enjoy the fruits of your labour. Reservations are required.

How many days do we need in Petra?

You should spend at least two days in Petra to be able to take in the major sites, such as the Treasury, Monastery, and Royal Tombs, but also to explore the less-frequented trails at your leisure.

What is the best time to visit Petra?

Petra – Jordan's most popular tourist destination – is best visited in spring, when the days are sunny and the temperatures neither too hot nor too cold. May in particular is a wise choice, as rainfall is quite low (at 4mm).