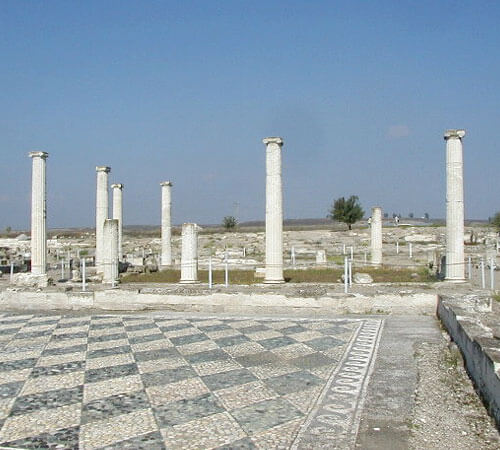 Pella is located in the Jordan Valley. Known in Arabic as Tabaqat Fahl, Pella has been continuously occupied for over 6,000 years. Like Jerash (Gerasa) and Umm Qais (Gadera), Pella prospered during the Greco-Roman period from links to trade routes and influences from several different cultures. After the Roman conquest in 63BC Pella became a member of the Decapolis, a confederation of ten cities in Palestine, Jordan and southern Syria linked by commercial and political interests .

In the 1st Century AD Christians took refuge in Pella whist fleeing the Great Jewish Revolt. Subsequently the city became the site of one of Christianity’s earliest churches. Following the Battle of Yarmouk in 636 Islam dominated the region and Pella was called by its equivalent Arabic name Fahl. Pella was a thriving Umayyad town for just over 100 years, with an attractive residential area on the Tell. Some wonderful examples of Umayyad pottery has been found here, made in the Jerash kilns. The city, like many in Jordan, was destroyed by an earthquake in 749.

Sine 1979 excavations have been carried out on the ruins, however there is still a large portion buried. Visitors to Pella can see the remains of a Chalcolithic settlement, Bronze and Iron Age walled cities, Byzantine churches and houses, a small medieval mosque and an Islamic residential area. The only surviving Roman monuments are the small remains of a bath house and nymphaeum, a small theatre and a wall of a temple. The most impressive monument is a large Middle Bronze Age temple with large stone walls.