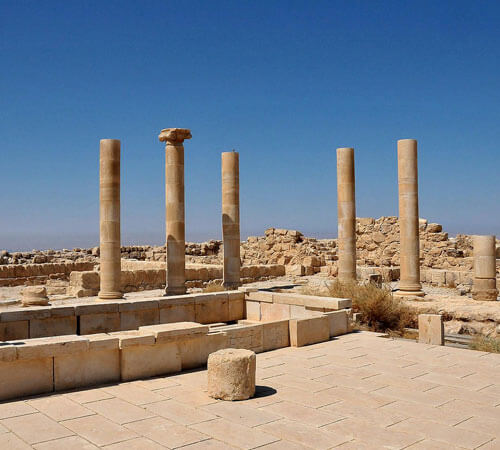 Less an hour’s drive from Amman along the Kings’ Highway lies Mukawir, ancient Machaerus. The fortress was originally built by the Hasmonean king Alexander Jannaeus around 90 BC. It was destroyed by the Romans and rebuilt by Herod the Great, King of Judea, around 30 BC as a military base for his territories east of the Jordan River.

Following Herod the Great’s death, his kingdom was divided between his three surviving sons – this area fell to Herod Antipas. Some 30 years later Antipas divorced his wife (a Nabataean princess, daughter of Aretas IV) to marry Herodias, wife of his brother Philip.

When John the Baptist publicly criticised Antipas’ behaviour, Herod imprisoned him at Machaerus. Some 2 years later when Herodius’ daughter Salome danced before the king, she was presented with John the Baptist’s head as a reward.

In the course of history the fortress was destroyed, leaving only the foundations intact of what was described by contemporary historian Josephus as “a palace breathtaking in size and beauty”. The remains of the Herodian palace include rooms, a large courtyard, an elaborate bath, and fragments of the mosaic floor. Whilst little remains of the fortress, there are wonderful views across the Dead Sea to the Jerusalem Mountains.