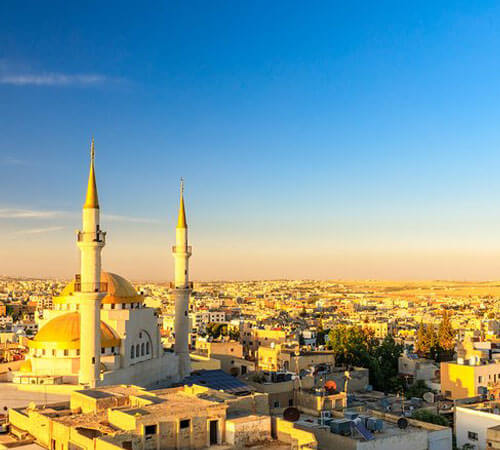 Madaba (Medeba of the Bible) is a small town located just 30 kilometers south-west of Amman. It is known as the “city of mosaics” for the incredible number and superb quality of mosaics created during the Byzantine and Umayyad periods. The most famous is the 6th Century mosaic map of the Holy Lands on the floor of the St George Church in the centre of Madaba. It is the oldest existing map of the Holy Lands and was discovered during church renovations in 1896. Originally part of the floor of a Byzantine Church, it was built during the reign of emperor Justinian 527-565 AD, when a large Christian community with its own bishop lived in Madaba.

During this period, Madaba was the centre of a mosaic school which accounts for the large number of mosaics adorning not only its churches but many public and private buildings as well. Though the designs originated from Constantinople, the quality of workmanship of the mosaics is from the skilled Madaba craftsmen. In 1992 the Mosaic School of Madaba began, training artisans in the art of making, repairing and restoring mosaics. The School is located next to the Archaeological Park where more beautiful examples of mosaics can be found in Hippolytus Hall, the Church of the Virgin Mary and the Apostles, the Burnt Palace, and the Church of Prophet.