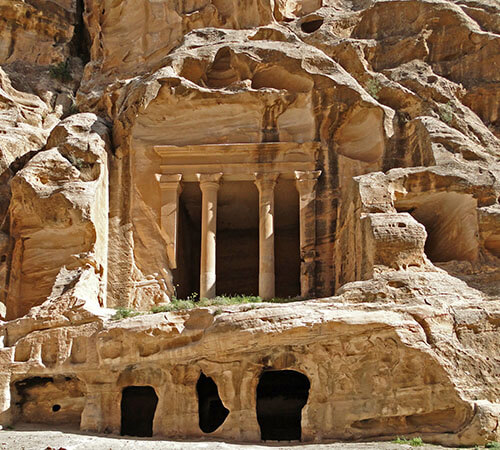 Al-Beihda (Little Petra) is just 10 minutes driver from Petra. Al-Beihda means the “white one”, named after the very pale colour of the surrounding rocks. Entrance is through the 350 metre long Siq al-Barid (the “cold Siq”, so named because the high walls on either side of this narrow canyon prevent sunlight entering to warm it. It then opens up into 3 wider areas. Believed to have been an important suburb of Petra, it was a resting place for the camel caravans from Egypt and the Mediterranean coast. Little Petra provided accommodation and dining halls for the cameleers and merchants; their animals grazing on the fertile plains nearby. The Brides’ Well, located nearby, is a massive underground water storage carved out of the mountain by the Nabataeans to collect water to feed the animals and crops.

Al-Beihda is indeed a small Petra containing tombs, temples, triclinia, houses, meeting halls, water channels and cisterns. Of particular interest are the remains of a beautifully painted fresco on the ceiling of one of the houses showing birds, grape vines and flowers.

Unfortunately buildings on the lower levels have suffered damage from floods however the majority of buildings are in good condition and the carvings at entrances to temples, etc. still crisp and clear.

At the end of the canyon are well-worn steps leading up to a small boxed canyon and a track for hikers wishing to undertake a round-trip back to the entrance to Little Petra.

Whilst at Little Petra, walk the short distance to the Neolithic Village dating back to around 7,200 – 6,500 BC to gain an understanding of what life was like at a time the nomads decided to settle.