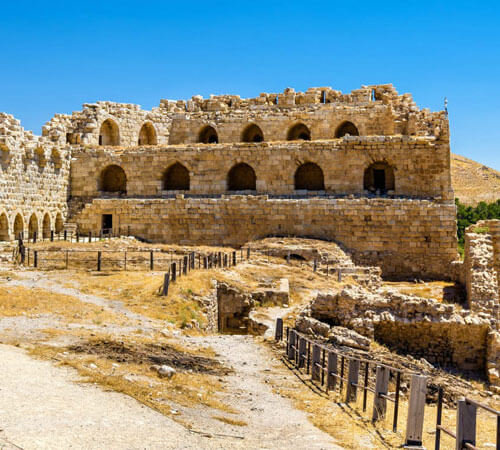 Situated on the Kings’ Highway, Karak was the ancient capital of Moab. The fortress was strategically located high above rich agricultural land, on the ancient crossroads between the north-south trade and pilgrimage route of the Kings’ Highway, and the east-west route from Wadi Karak and the Dead Sea across the mountains to the edge of the Eastern Desert.

Karak had been a fortress since biblical times, during Roman times it was called Characmoba and appears as such in the famous mosaic map of the Holy Lands in Madaba. However what can be seen today is mainly from Crusader times. Similar to Shobak Castle further south, Karak was controlled by Reynald de Chatillon from 1176 and rather than protect the rich caravans travelling the Kings’ Highway, he raided them. He also built ships which were transported overland to the Red Sea as part of a plan to attack Mecca. As a result of these actions Sultan Salah ad-Din invaded the kingdom in 1187 and despite its impressive defensive fortifications, was able to successfully capture it in 1189.

Karak remained in Ayyubid hands until it was taken by Mamluk Sultan Baybars in 1264. He and his heirs rebuilt much of the castle. In 1326 Moroccan explorer ibn Battuta, upon seeing Karak, referred to it as “the Castle of the Raven”. It became a British administrative centre after World War I and remained as such until the Emirate of Transjordan was founded in 1921.

The fort consists of stone-vaulted halls and long passageways. Across the moat to the west is the tower from which De Chatillon threw his prisoners to their deaths. The tower in the north-west corner was added by the Mamluks in the 13th century. At the southern end of the fort is a multi-storied building which used to be the dungeon. Just to the right of the castle entrance, in the lower court, is the Karak Archaeological Museum which introduces local history and archaeology of the Karak region from the prehistoric period until the Islamic era.