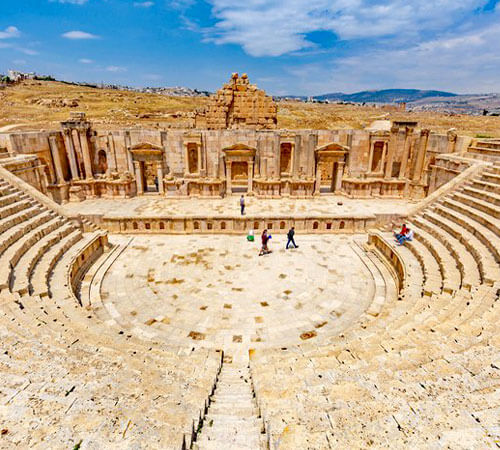 Jerash is one of the best preserved Roman provincial towns in the Middle East. Lying approximately 50 kilometres north of Amman, it is situated in a fertile valley with a good water supply. Excavations have revealed that the area was settled as early as the Neolithic period (9,000-5,500 BC) with Bronze and Iron Age pottery found.

Believed to have been built by Alexander the Great or his general Pompey in 332BC, there are, unfortunately few remains of the Hellenistic era. As with many other cities in Jordan, General Pompey conquered Jerash in 63BC and thus began the Roman period of occupation. Renamed Gerasa, it became one of the cities of the Decapolis, a confederation of ten Roman cities in southern Syria, Jordan and Palestine with strong commercial, political and cultural interests.

Under Roman rule, Gerasa continued to prosper and it is estimated there were around 20,000 inhabitants by the second century AD. Colonnaded streets were built. The main street – the Cardo – links the north and south gates through an Oval Plaza. Above the Plaza is one of two superb Roman Theatres with a seating capacity of 3,000. Seats are numbered..!!! This theatre, with excellent acoustics, is still used today for evening events in the summer months. In between the Theatre and Plaza is the Greek Temple of Zeus.

On the highest ground of Gerasa sits the Greek Temple of Artemis, the patron goddess of the city, with columns over 12 metres high. The temple contained fine marble paneling and a richly decorated cult statue within the cella. Access to the temple from the Cardo was via a monumental gate and 3 levels of stairs.

A large public bath house (Nymphaeum) was located close to the monumental gate. Constructed in 191 AD, the fountain was originally embellished with marble facing on the lower level, painted plaster on the upper level, and topped with a half-dome roof, forming a giant niche. Water cascaded through seven carved lion’s heads into small basins on the sidewalk of the Cardo.

Between the Nymphaeum and the Oval Plaza are the remains of the 8-sided Macellum (market). . Also in the 2nd century the Cardo was made wider and grander, with Corinthian capitals crowning its columns – the old Ionic ones were reused in various parts of the city. Two cross-streets were made, the North and South Decumanus. West of the Cardo rose a handsome octagonal macellum, or food market; and also, just south of the North Decumanus, a second smaller theatre, or odeon. Two large bath houses were added further east, near the residential areas.

The Roman Emperor Trajan constructed roads throughout the provinces, resulting in more trade to Jerash and the town prospered. To honor the visit of Emperor Hadrian in 130 AD, a triumphal arch was built. It is through this arch that visitors to Gerasa begin their discovery of this amazing city. Just through the archway, is a hippodrome, capable of seating up to 15,000 spectators. Visitors are able to enjoy a Roman Army Chariot Experience (RACE) twice a day.

During the Byzantine period many churches were built and a large Christian community was established in Gerasa. Several church ruins can still be seen. After the Arab conquest of the city in 636 it became an Umayyad regional centre. The earthquake in 749 destroyed the city. With the Caliphate transferred to Baghdad the city dropped into obscurity until 1806 when a German scholar – Ulrich Seetzen, identified the ruins as Gerasa. In 1878 the Ottomans permitted some Circassians to settle in the area and gradually their village grew to become the Jerash we know today.