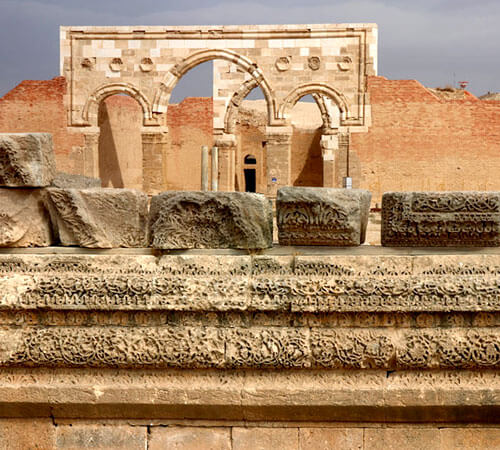 The castles, for want of a better description, were built between the 7th Century and 8th Century and are situated in the Eastern Desert. The majority of castles lie on the ancient trade routes towards Medina and Kufa. The function and use of the buildings has still not been determined however there are different theories concerning their use – they may have been fortresses, meeting places for Bedouins, retreats for the nobles or used as caravanserais. Many seem to have been surrounded by an oasis and to have served as bases for hunting. The castles have been rebuilt partly from earlier remains and partly new constructions.

The castles represent some of the most impressive examples of early Islamic art and Islamic architecture. Most notable is that figurative frescos and reliefs, animals and people, are featured in the artwork, rarely seen on such a large and public scale.

The 3 most popular castles, which can be visited in one day, are:

whilst it looks like a castle the building’s internal arrangement do not suggest a military use, and slits in its wall could not have been designed for arrow-slits. It may have been a caravanserai or resting place for traders although it is not on any of the major known trade routes. This castle has been beautifully restored.

The best-known of the desert castles was built sometime between 723 and 743, by Walid Ibn Yazid, the future Umayyad Caliph Walid II, whose dominance of the region was rising at the time. It is considered one of the most important examples of early Islamic art and architecture. The building is the remnant of a larger complex that included a castle, of which only the foundation remains. What stands today is a small cabin, meant as a royal retreat, with no military function.

The main entry vault has frescoes depicting scenes of hunting, fruit and wine, and naked women. Other frescoes depict a haloed king sitting on a throne, and a boat floating in water abundant with fish and birds. Within the 3 bath chambers the frescoes depict animals, plants and trees, however the hemispheric dome in the hot bath represents the heavens in which the zodiac is depicted as well as over 30 constellations It is believed to be the earliest image of the night sky painted on anything other than a flat surface. It has been listed as a UNESCO World Heritage Site.

Is strategically placed overlooking the Azraq Oasis, the only permanent water supply for 12,000 square kilometres of surrounding desert. The castle is constructed of the local black basalt and is a square structure with 80m long walls encircling a large central courtyard. It was used by the Romans, Byzantines, Umayyads and Ayyubids. In the 16th Century, the Ottomans stationed a garrison in the fort. The most famous occupant was T E Lawrence (Lawrence of Arabia) who had his headquarters based there during the Arab Revot against the Ottoman Empire..