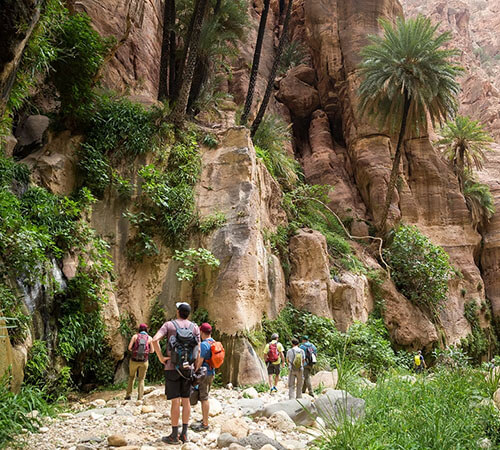 Dana has been occupied since ancient times, its settlers drawn to the area by water springs, fertile soil and its strategic location. Even today the springs provide water for the fruit and vegetables grown in the village. Archaeological evidence shows that the area has been inhabited by Palaeolithic, Egyptian, Nabataean and Roman civilizations. The current village has its origins from the Ottoman era. Constructed of mud plastered over stone and wood, the houses nestle into the side of the mountain overlooking the 320 square kilometres of Dana, the largest nature reserve in Jordan. By the 1980s Dana had almost been totally abandoned as the residents moved to a new village nearby (Qadisiyah) close to a cement factory where they worked.

In the 1990s electricity arrived at Dana and the Royal Society for the Conservation of Nature (RSCN) undertook restoration of many of the houses and created income-generated projects to lure residents back. Today, visitors can enjoy seeing how the local crops are preserved and the designing and making of fine silver jewellery. The Dana Reserve consists of a chain of valleys and mountains which extend from the top of the Jordan Rift Valley down to the desert lowlands of Wadi Araba. It is the only nature reserve in Jordan that crosses four bio-geographical zones – Mediterannean, Irano-Turanian, Saharo-Arabian, and Sudanian penetration. Dana supports a diverse range of wildlife including varieties of several rare species of plants and animals. Six hundred species of plants, 37 species of mammals and 190 species of birds can be found in the Reserve of which 25 are known to be endangered. In addition to this wonderful array of wildlife, visitors can see the archaeological ruins of Feynan and the beautiful Rummana Mountain.

Dana is a fantastic location for hikers. Trails taking from 2 hours to a full day to complete cover many areas of the Reserve. Some trails can be taken un-guided, however the majority require the services of an on-site rangers. Accommodation in the area varies from a campsite at Rummana to the Dana Village Hotel and the Dana Guest House. Within the Guest House complex is a Visitors’ Centre providing information about Dana and the RSCN plus a Nature Shop which sells silver jewellery and pottery crafted by the women of the village as well as organically grown produce from the terrace gardens surrounding it.