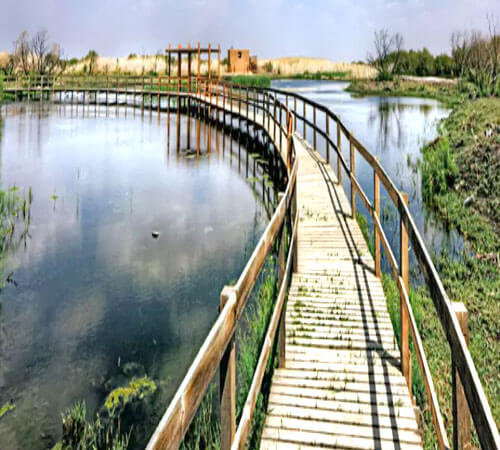 The small town of Azraq is located over 100 kilometres east of Amman and home of Qasr Azraq (Azraq Castle) which was built by the Romans in the 3rd Century. It was used by T E Lawrence (Lawrence of Arabia) as his headquarters during the Arab Revolt of 1917-1918.

Azraq is also home to a unique wetland oasis fed by aquifers, the only permanent source of fresh water within approximately 12,000 square kilometres of desert. As a result, this was a resting place for camel caravans, laden with spices and herbs, travelling between Syria, Mesopotamia and Arabia, and over 280 species of birds during their migration between Europe, Africa and Asia.

Unfortunately the water supply was severely depleted as towns and cities, as far away as Amman and Irbid, drew huge amounts of water from the Oasis, resulting in the destruction of a large part of the marshlands. In 1978 the Royal Society for the Conservation of Nature (RSCN) took over management of the Oasis in a bid to restore it. Today visitors can see several natural and ancient built pools, a seasonally flooded marshland and a large mudflat. Birds continue to rest at Azraq and it has become a popular place for bird watchers.

A trip to Azraq can be incorporated with a day tour to the Desert Castles.