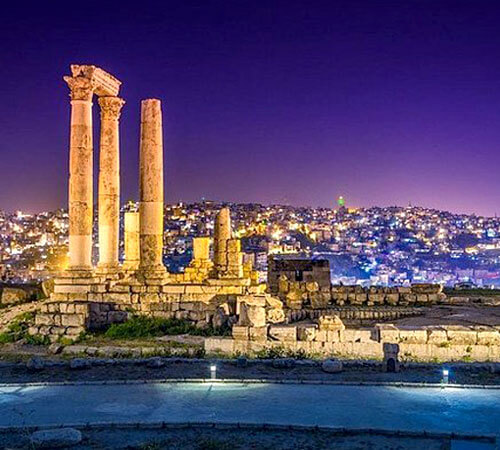 Salt, an ancient agricultural town and administrative centre in west-central Jordan, is on the old main highway leading from Amman to Jerusalem about half an hour’s drive from Amman.

It is believed that Salt was built by the Macedonian army during the reign of Alexander the Great. During Byzantine times the town was known as Saltus (Latin for “wooded valley”), became the seat of a bishopric and was considered to be the principal settlement on the East Bank of the Jordan River.

The settlement was subsequently destroyed by the Mongols but rebuilt during the reign of the Mamluk Sultan Balbas (1260-1277) and was considered a regional capital once again during the time of the Ottoman Empire. A raid in the early 1830s by the Egyptian viceroy Ibrahim Pasha in a campaign against the Ottomans resulted in Salt being blown up.

Salt was most prosperous during the late 19th century when traders arrived from Nablus to expand their trading network eastwards beyond the Jordan River. As a result there was a rapid expansion of Salt from a simple peasant village into a town with many architecturally elegant buildings. Tourists can still see many of these attractive buildings made from the local honey-coloured stone during a walking tour of the present day city. Other places of interest are a small museum and a handicraft school where traditional skills of ceramics, weaving, silk-screen printing and dyeing are displayed. The Salt Archaeological & Folklore Museum displays artifacts dating as far back as the Chalcolithic period through to the Islamic period. The Folklore Museum also presents Bedouin and traditional costumes as well as everyday folkloric items.

When Abdullah I became Emir of Transjordan in 1921 it appeared that Salt would be chosen as the capital of the new emirate given that the majority of industry and commerce flowed through this city. However Abdullah changed his mind following a disagreement with the notables of Salt and he decided to make Amman the capital. Whilst the relatively small town of Amman flourished, Salt’s fortunes declined.