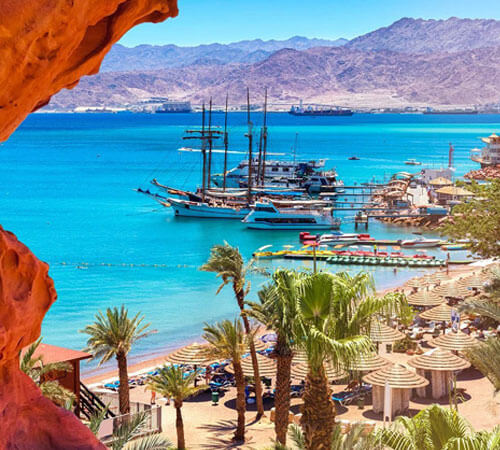 Jordan’s only seaport lies half encircled by mountains at the head of the Gulf of Aqaba, in the far north of the Red Sea. A busy port, it is Jordan’s fastest developing town and a popular destination for Jordanians and visitors’ alike seeking access to beautiful beaches and some of the best snorkeling and diving in the world. Many international hotels are located along the foreshore offering a variety of water sports.

In biblical times, there were two cities in this area – Eilat and Ezion Geber. The Israelites passed through the area on their wilderness travels, and later Moses led them near here on their detour around Edom. The Nabataeans founded the city of Ayla within the area of present day Aqaba and developed it into an important trading base along the route between the Mediterranean coast and southern Arabia, India and China.

Around 295, the city was fortified and a Roman legion based here. Excavations in recent years have uncovered a very early church of the late 3rd or early 4th century and built of mud brick. Ayla’s first bishop – Petros – attended the Ecumenical Council at Nicaea in 325, and his successors took part in later Councils. A handful of Christian carvings have been found although few churches. It is believed that most of the church stonework was used to build the walls of the Islamic city and its large mosques on a new site near the shore.

During the 12th century, the Latin Kingdom of Jerusalem controlled the area and built a fortress, and the Crusaders fortified the small island of Ile de Graye, now called Pharaoh’s Island, in the Red Sea. However the area became less prosperous due to earthquakes and attacks by Bedouins and Crusaders. King Baldwin I of Jerusalem took over the city in 1116 without much resistance. The center of the city was then moved along the coast about 500 meters.

The importance of this city continued to decline however especially after the opening of the Suez Canal in 1869 as many pilgrims bi-passed Ayla. At the beginning of the 20th century very few families remained. During WWI, the Ottomans were forced to withdraw after a raid by Lawrence of Arabia and Arab Forces. It was only in 1925, that Aqaba was detached from the Hijaz and became part of the new domain of Amir ‘Abdullah.

Today, visitors to Aqaba can see the remains of the original city as well as the Mamluk Fort with a museum next door. The museum houses Bronze Age artifacts dating back to 4,000 BC that were discovered in an archaeological site near Aqaba, thus providing proof that Aqaba is one of the oldest continuous settlements in the region. The museum also houses a collection of artifacts from the 7th – 12th Century AD including the milestone number 1 of the historic Via Traiana Nova Levantine trade route.