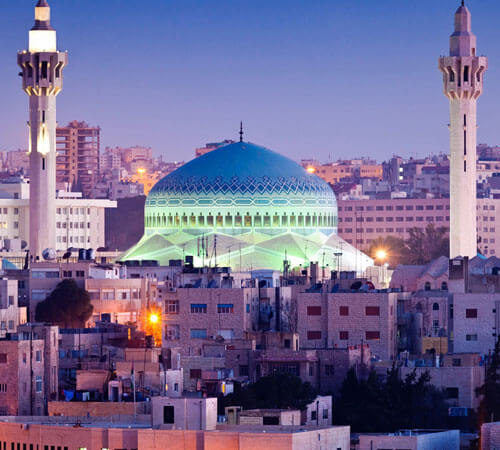 Consistently overlooked and under-rated by travelers to the Middle East, the Jordanian capital Amman stands in marked contrast to its raucous neighbours, with none of the grand history of Damascus, not a whiff of Jerusalem’s tension and just a tiny fraction of Cairo’s monuments. It’s a civilized, genial city with unexpected charm. Investment is pouring in, new buildings are going up, neighbourhoods are being rejuvenated and the city is humming with cafe’s, galleries and commerce. If you are dreaming of medieval mosques, gloomy spice bazaars and fading romance, go elsewhere. If you want a handle on how a young, busy Arab capital is making its way in the world, Amman is for you.

Amman was originally built on 7 hills however the city is now spread over 20. It is one of the oldest continually inhabited cities in the world. Once the capital of the Ammonites, it was known as Rabbath-Ammon in the Old Testament. After Alexander the Great conquered the region in 332BC, his successor Ptolemy II Philadelphus rebuilt Rabbah and named it Philadelphia. In Byzantine times, Philadelphia was the seat of a bishopric and still a regional centre when it was conquered by the Arabs in 635. Under the Damascus-based Umayyad Dynasty, the city’s name reverted to Amman. The city continued to flourish until shortly after a great earthquake in 749 when Abbasid took over control of the city and power shifted east to Baghdad. Amman’s influence began to wane and although it continued to serve as a stop for pilgrims on the way south to Mecca, over the following centuries it became a desolate town. When the Emirate of Transjordan was established in 1921, Emir Abdullah chose Amman to be its capital.

Centrally located within Jordan, Amman is the perfect base to begin your exploration of this amazing country.