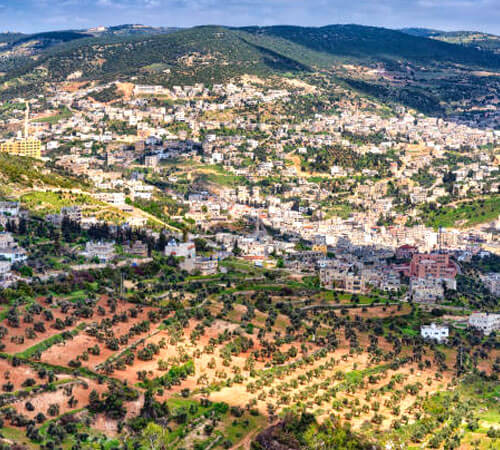 North-west of Jerash, overlooking the Jordan Valley, stands Qa’lat Al-Rabad, a muslim Ayyubid fort situated above the town of Ajloun. Built by Izz al-Din Usama, one of Salah al-Din’s generals in 1184, the original castle had four towers with arrow slits in the thick walls and was surrounded by a moat up to 15 meters deep and about 16 meters wide.

It was built to control the iron mines of Ajloun and to protect the country from Crusader attacks. The castle dominated and protected the three main trade and commercial routes leading to the Jordan Valley, between Jordan and Syria, and was one of a chain of forts that lit beacons at night to pass signals from the Euphrates as far as Cairo.

In 1215 the castle was enlarged by Aibak ibn Abdullah, a Mameluk officer. A new tower was added in the south-eastern corner as well as a bridge. Further expansions were made by Salah al-Din including restoration of the north-eastern tower, however the castle was destroyed by Mongol invaders in 1260. Later it was conquered and restored by the Mamluk Sultan Baybars. Severe damage was sustained to the fort from earthquakes in 1837 and 1927 however it has since been beautifully restored by the Jordan Department of Antiquities.